welcome to my garbage page. it isnt like the rest of the site bc i will be posting some godawful art i've made. i can (sometimes) draw better than this irl, and this is kinda my main style but kinda not. i guess what im tryna say is dont take any of this art on here seriously. anywhay.

btw i moved some pieces from here to ass.html, bcuz they were shit. 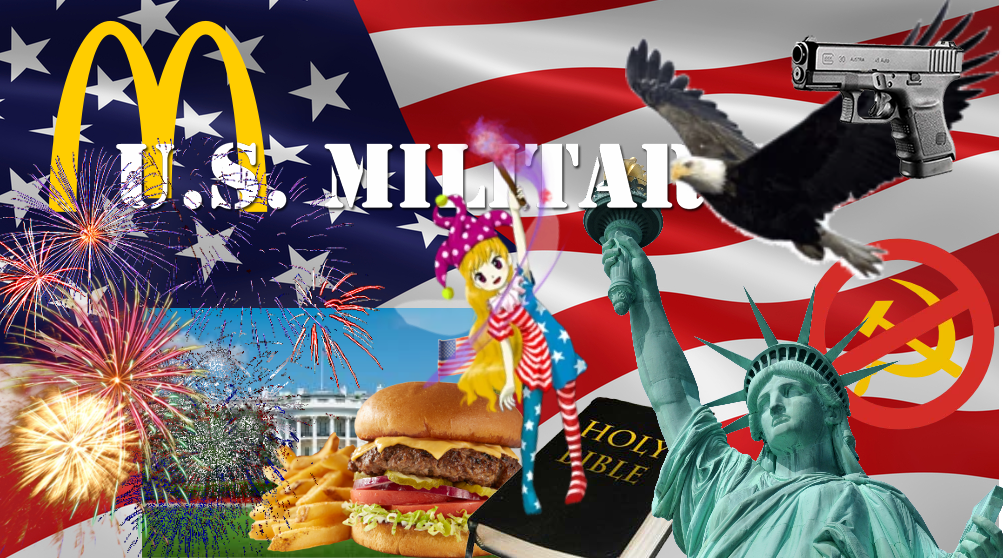 i made this a very long time ago, like 2 years ago i think. but i nevr posted it bc i didnt feel like it. but now i do. the embodinment of america. it was like 1 am when i made this i think. good pic i think

aNiMatIoN iS mY pAsSiOn!!!!1 anyway heres the wacky behind movers with marisa just stanign there. i made this in ms paint over 2 days, and i gotta say, im pretty proud of it. 8 frames of LOVE. also i fixed this, it used to have mai's shoes pink instead of green, and she was very jumpy. if you wanna see the old one, it's here 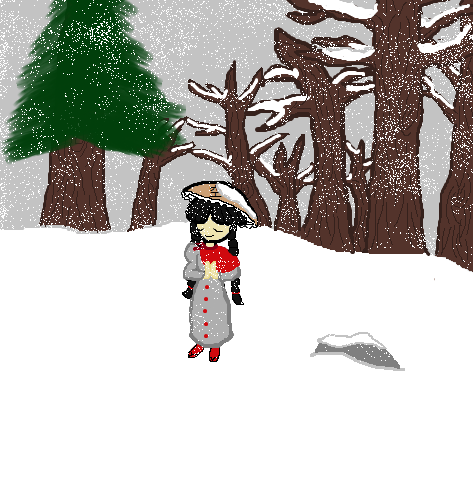 i really only spent a day on this. i was workin g on a different thing but i thiought it was ugly so i stopped working on it and made the comfy narumi instead

a new thing in record time!! it took a lot less time than "dancers" bc i only had to move the arms, not the whole body, and therw was only 1 yuuka. anyway, this was a lot funnier in my head, but idk i think its good. 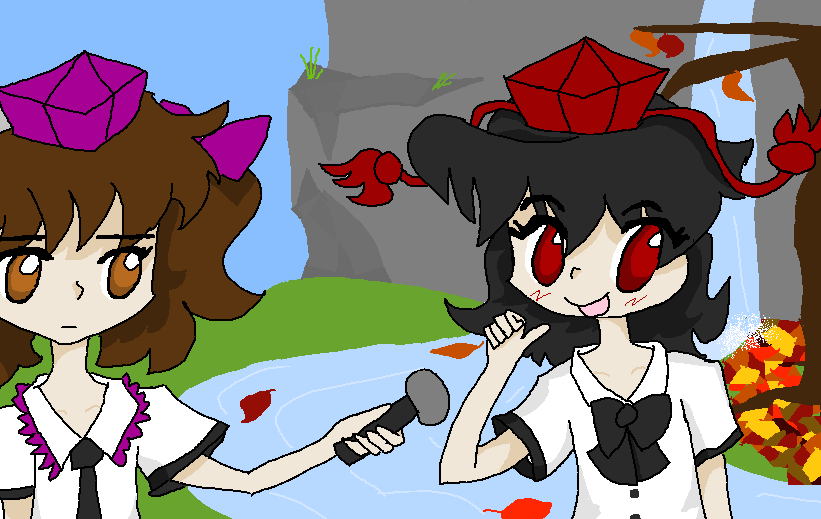 i was gonna have text in the picture, but it wouldnt fit, so heres what its s'posed to say

hatate: so what're your thoughts on this most recent incident? 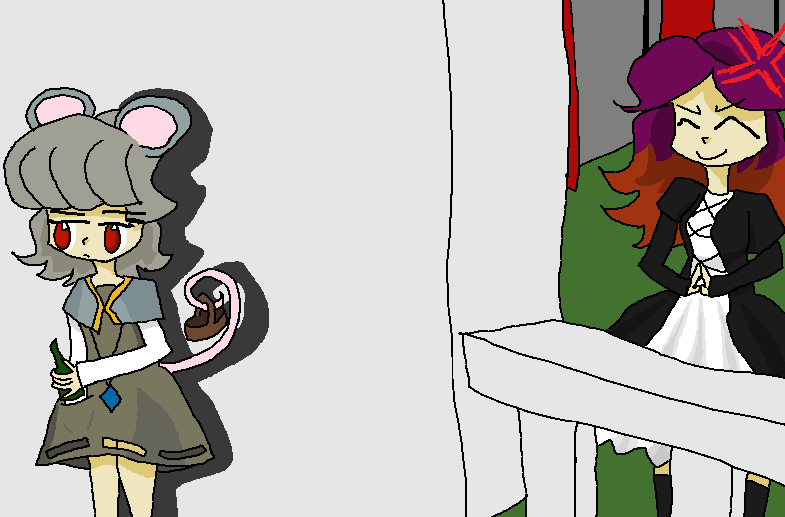 the stress of the temple life's been gettin to nazrin. goin thru her teen angst phase. 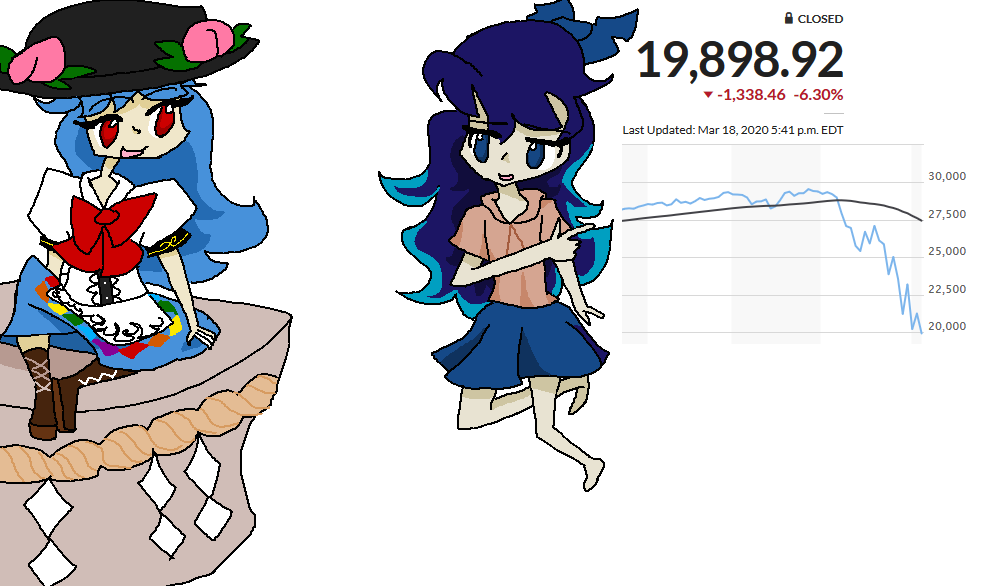 uh oh, stock market's goin down! also i had no idea where this would take place so it just takes place in an empty void i guess

once again, i didnt have room for the dialogue to be in the picture, so here's what it's supposed to say:

shion: hey buddy, look what i did

tenshi: shion, you psycho, this is some of the most fucked up stuff i've seen ya do. i love it! 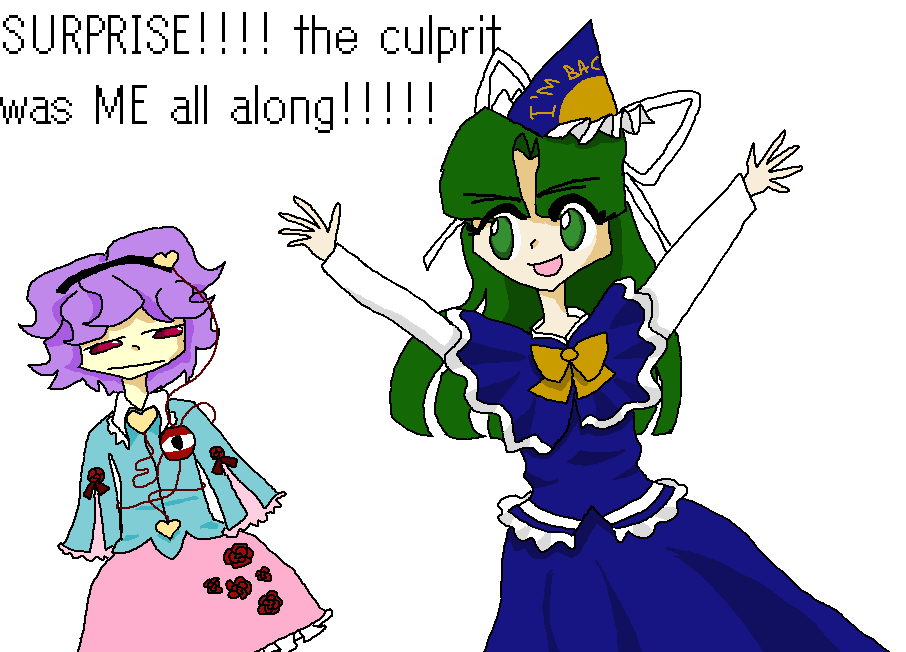 you fellas seen the new chapter of detective satori??

i dont like how ppl are dissing on the art, i think its very cute!!!!!!! and i LOOOVE the new designs they all got, its real cute!!

jesus christ this is a thing i made. sanae but she's 2007 emo before she arrived in gensokyo. was emo a thing in japan at all? whatever. why'd i do this?? hhhrngh i dont know but tbh im kinda happy w/ how it turned out. it was vry fun to make, especially adding all the stuff in blingee. also she would definently be the kid at your school who has, like 40 pets, and will use every opprotunity they can to name all of them. good memories... 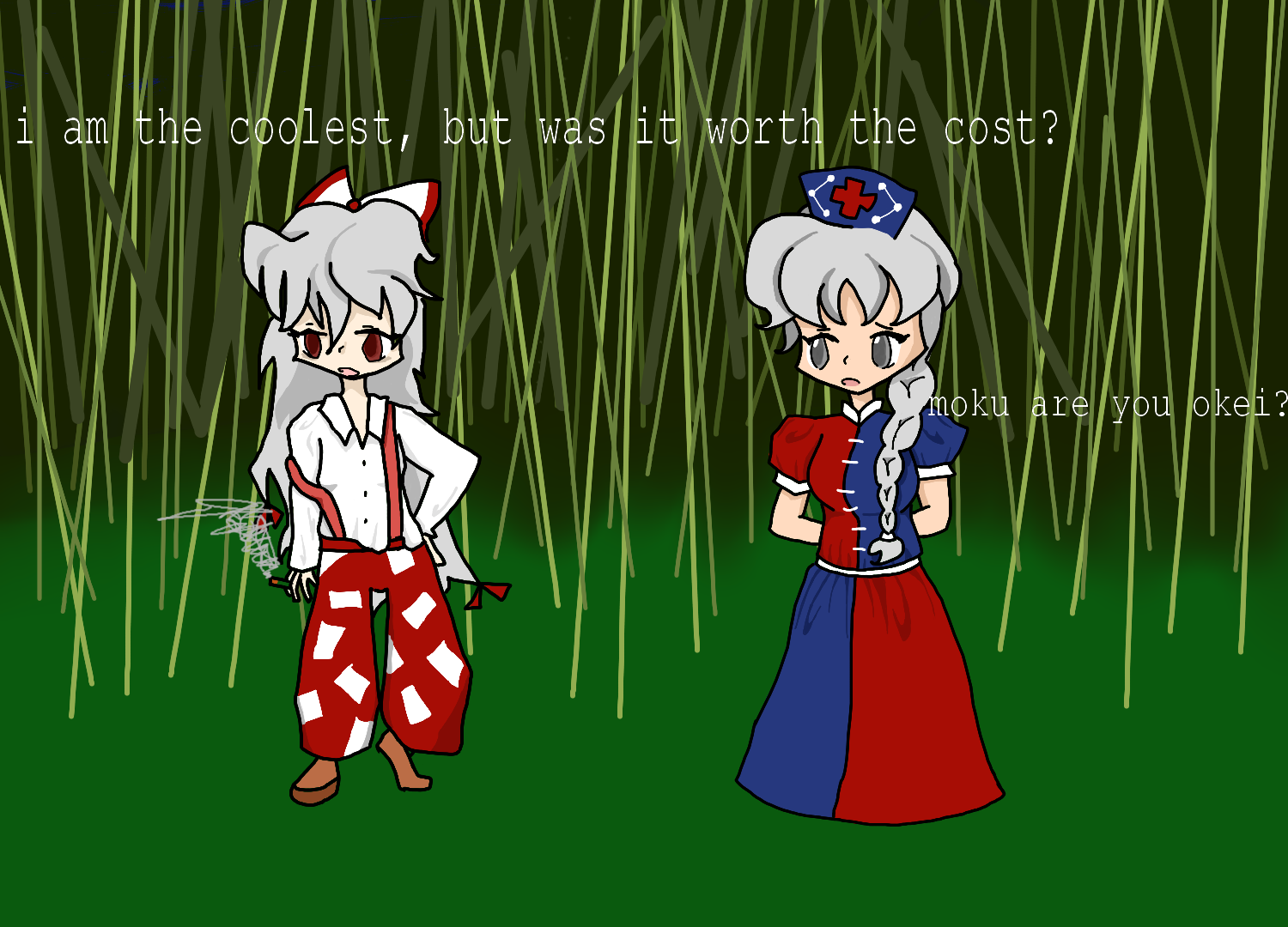 so awhile ago i downloaded a new painting program called krita, its very good and its FREE!!!! but anyway i've been makin som goofy drawings on there for a bit but i never bothereed to finish them. anyway, i decided "why not remake the first thing i made on here?" so i did. also ik the background sucks ass, i dont fw backgrounds. also i sill hid eirin's hands behind her, i dont fw hands. 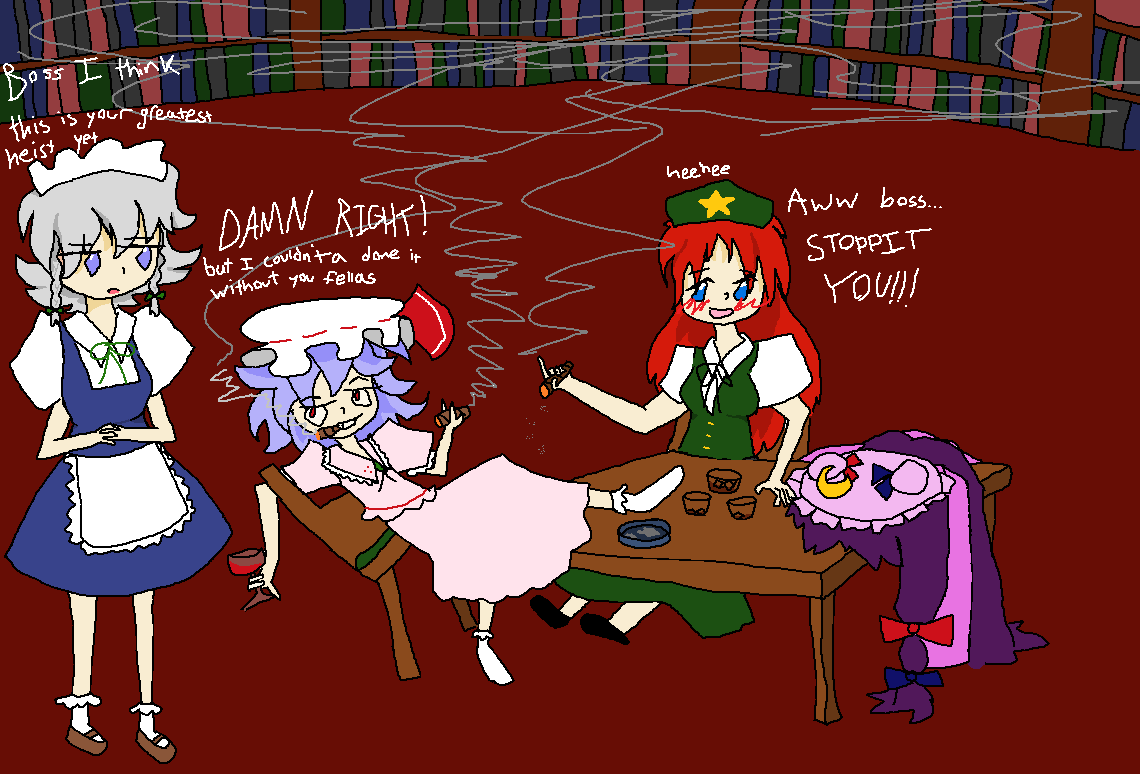 so this is for octouhouber. da first prompt is "festival" so i made da scarlet crew celebrating da mist everywhere. couldn'ta i made it in kirta? yea maybe but then thta means i'd have to put at least a lil bit of effort into it. im just doin this for fun. for shits n giggles. for teh lulz.

anywyay if you cant read the text, here's what it says:

sakuya: boss, i think this is your greatest heist yet

remilia: DAMN RIGHT!! but i couldn'ta done it without you fellas 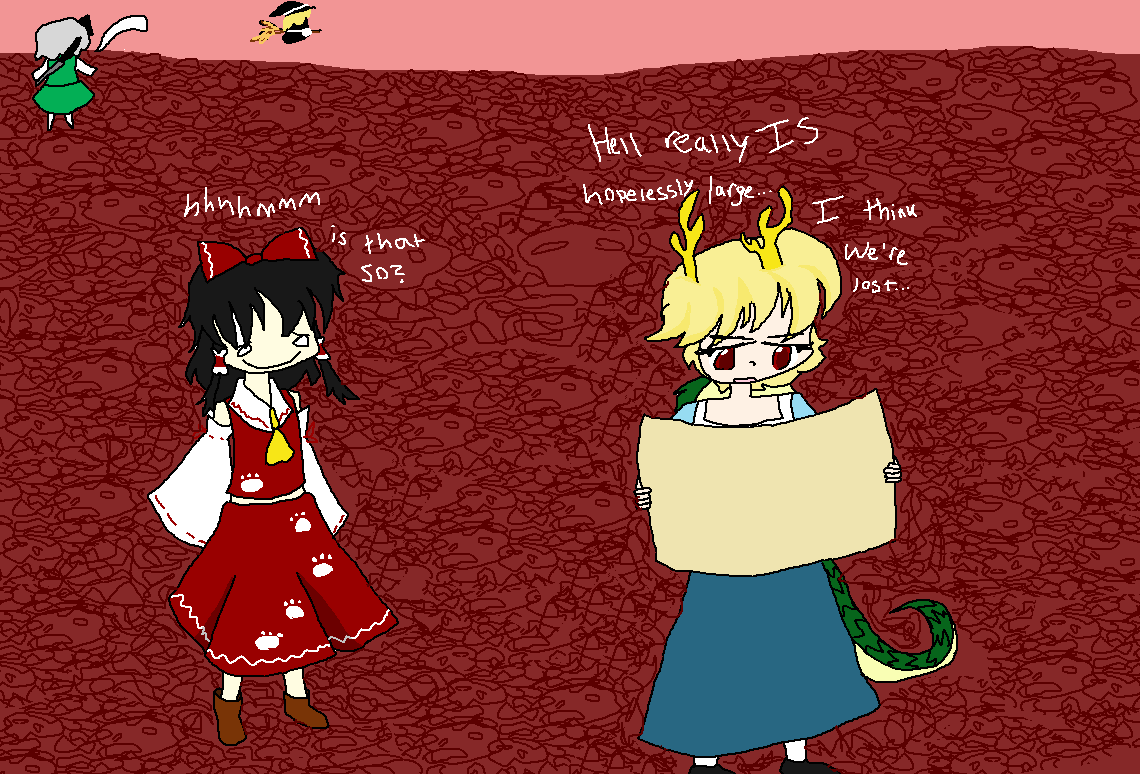 this one's about reimu and the gang lost in hell 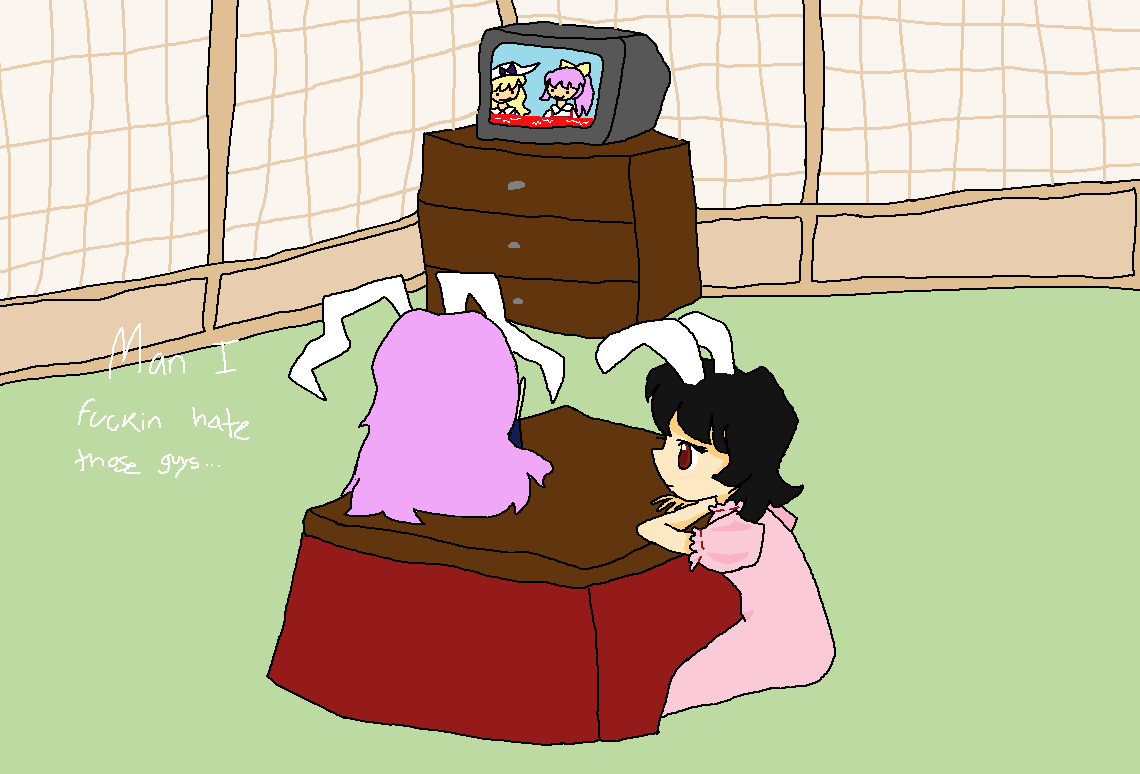 this one's about reisen and her shitty ex-bosses 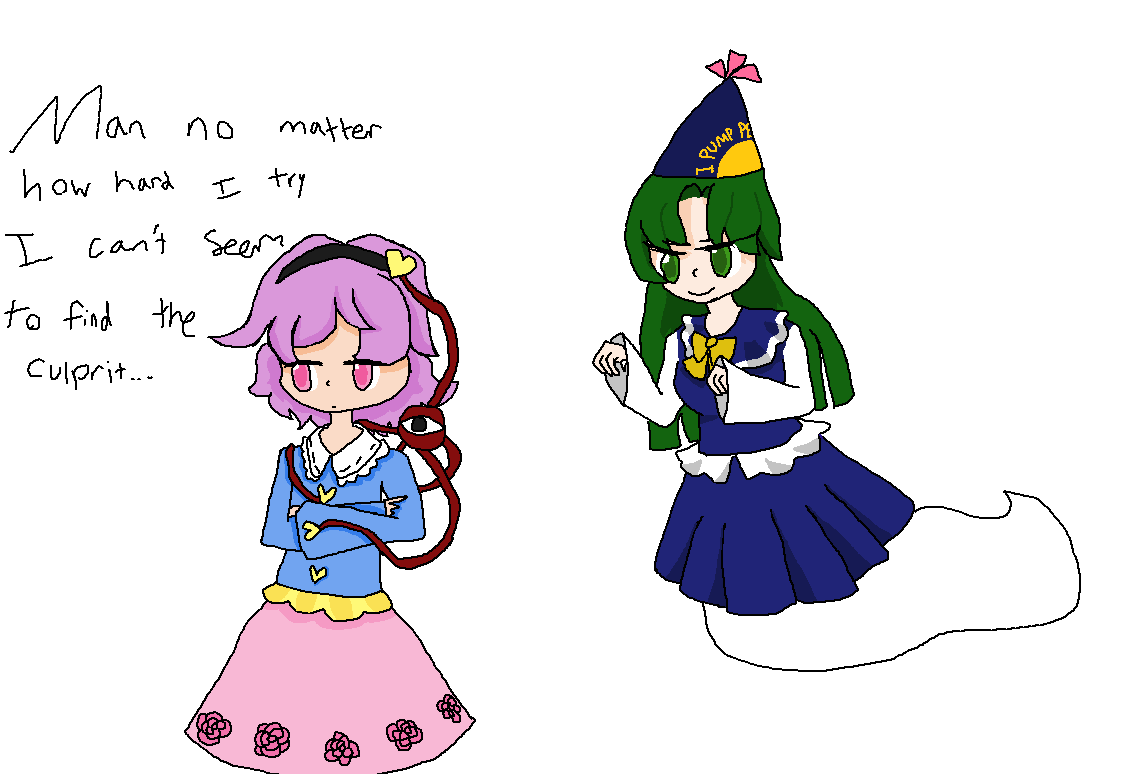 from now on every shitty CDS fanart i make will take place in a barren land. its not a bug, its a feature or smth like that 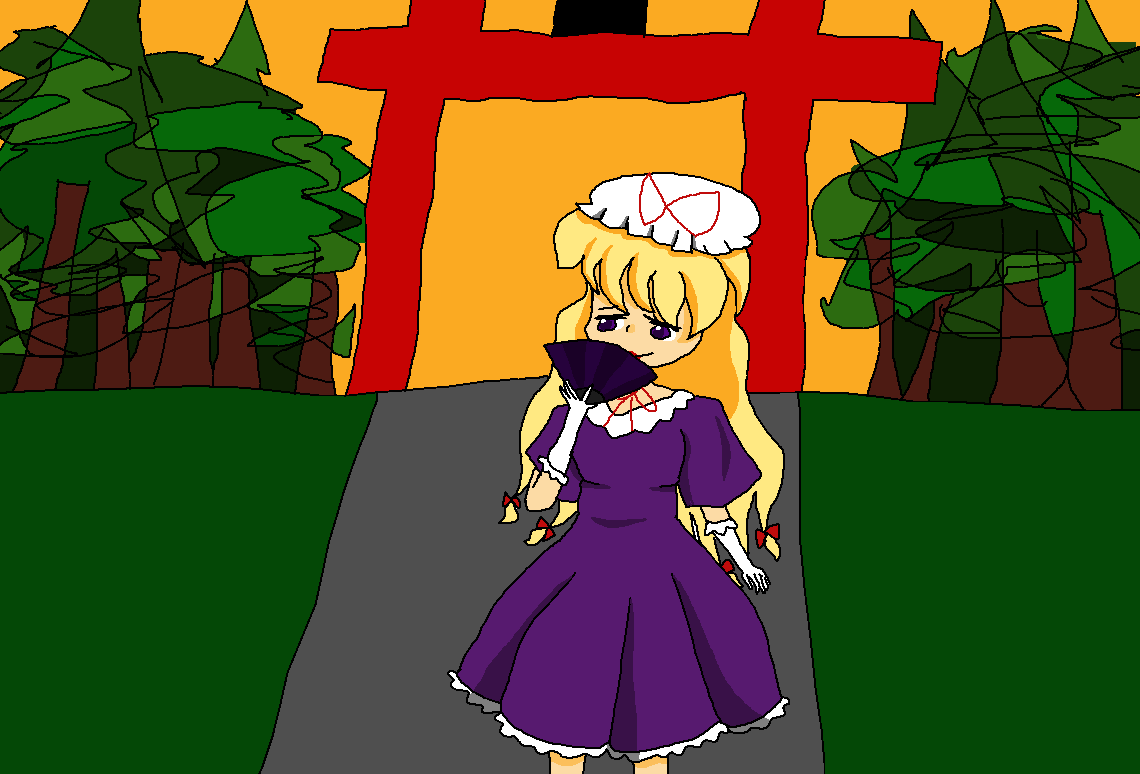 this one's about the baddest bitch in gensokyo. she keeps da balance 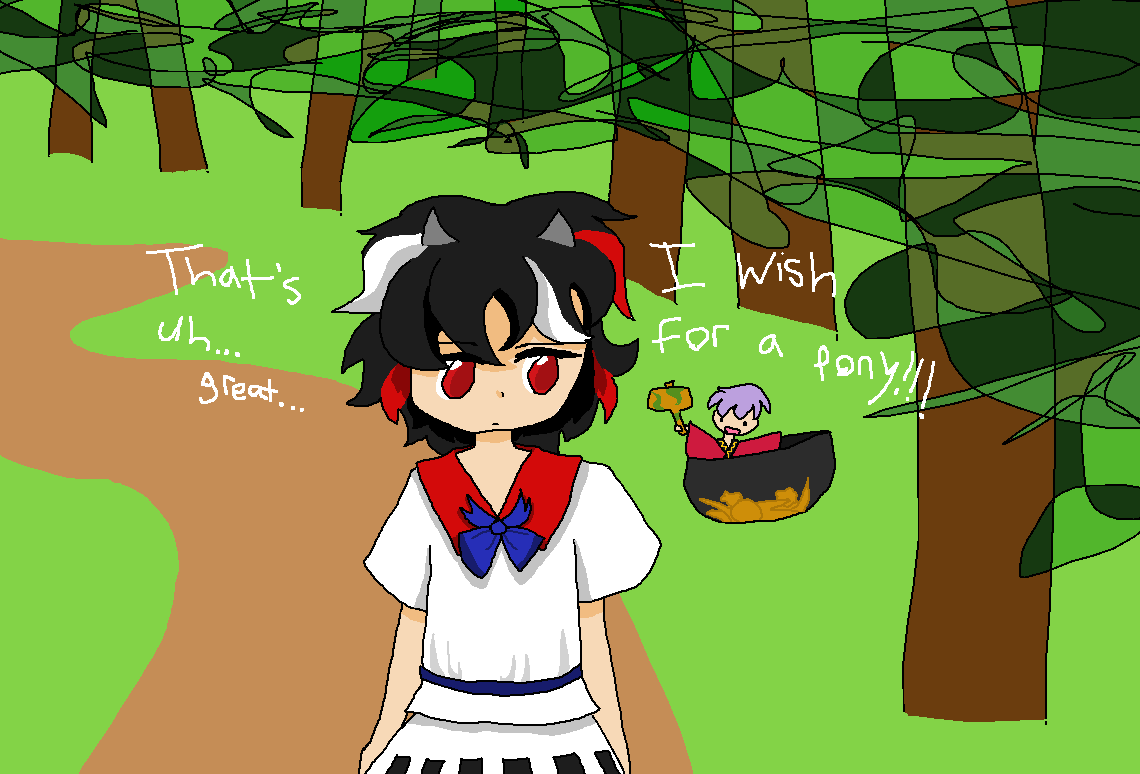 this one's about the dynamic duo making their business plans 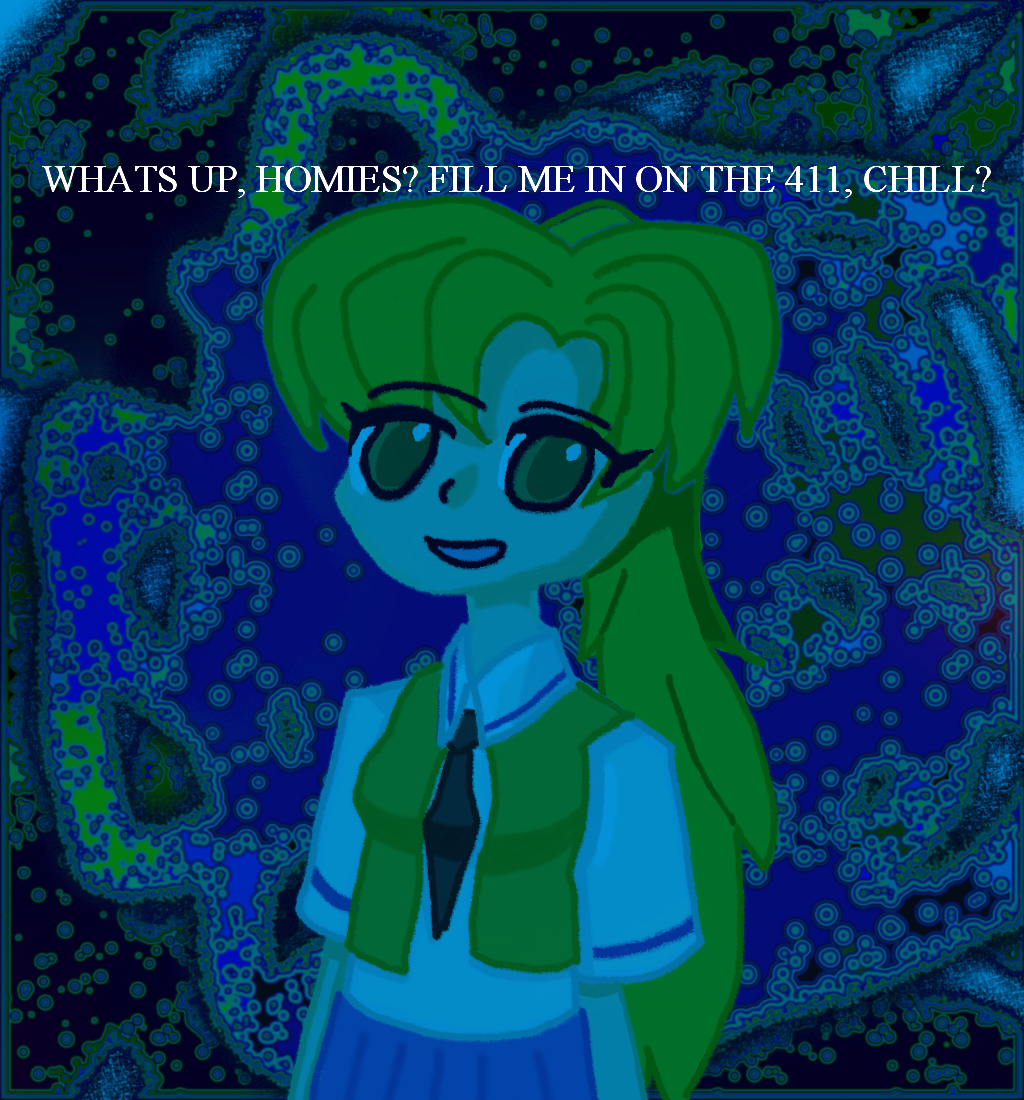 been a while since i added smth 2 here ^^7 gomenasai~! 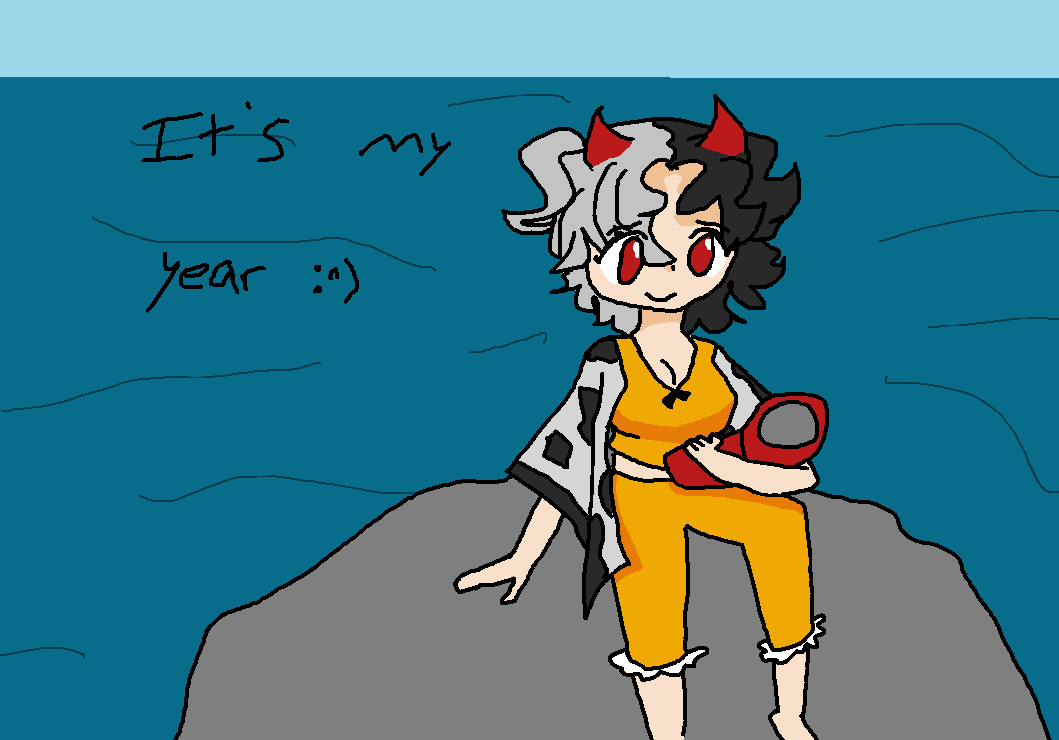 was once a shitty transparent

on 5/19/21 i edited this tiny twei, and the new version is the one you see here. here is the old version 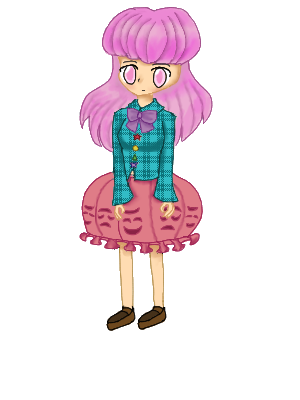 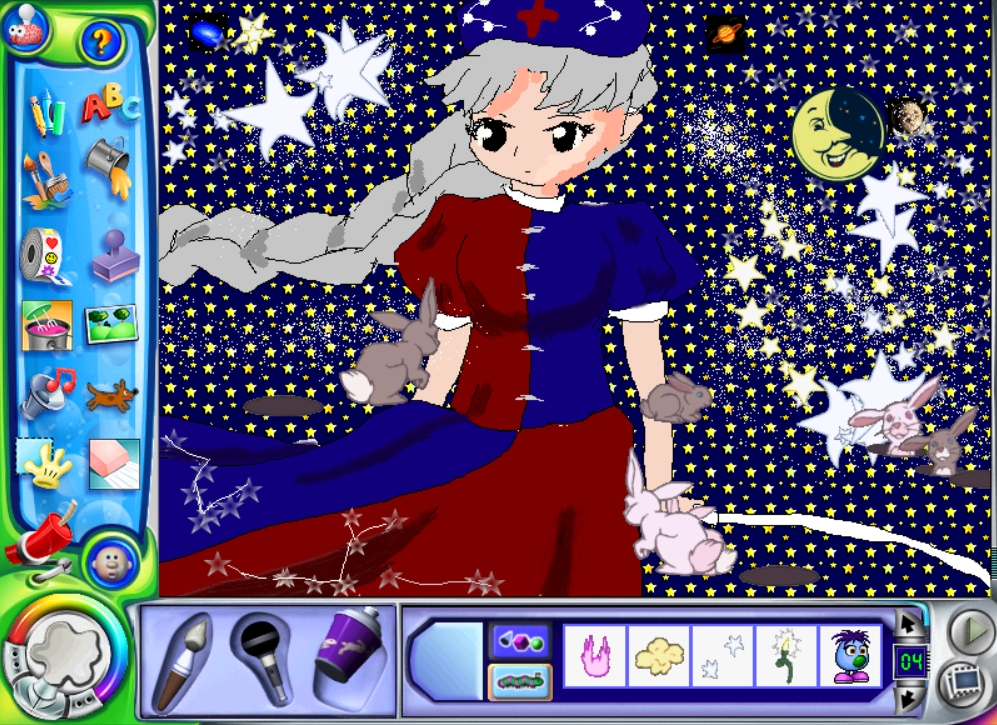 lololol i downloaded kid pix from the internet archive and i made eirin!!!! i went a lil overboard on the decorations though ^^7 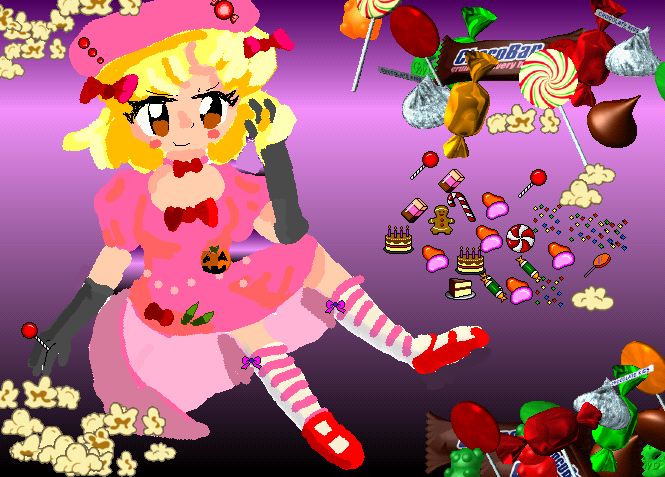 lambdadelta but kidpix lol. i showed this to my family they said it was good :^) 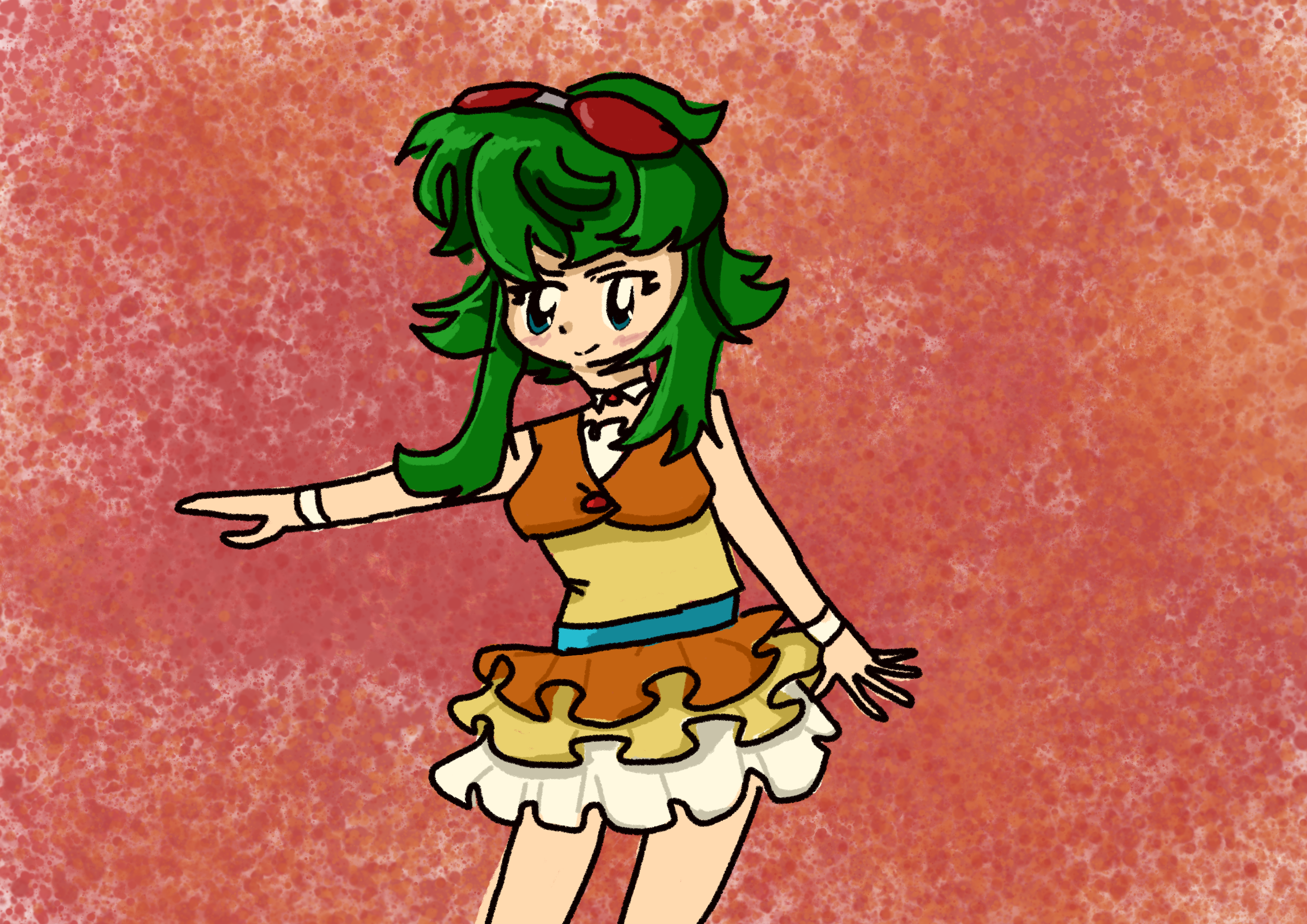 i realized its been awhile since i drew smth in krita....... so its gumi lole :^))) lole i like gumi i'm kinda getting back into bokkaroid >_< 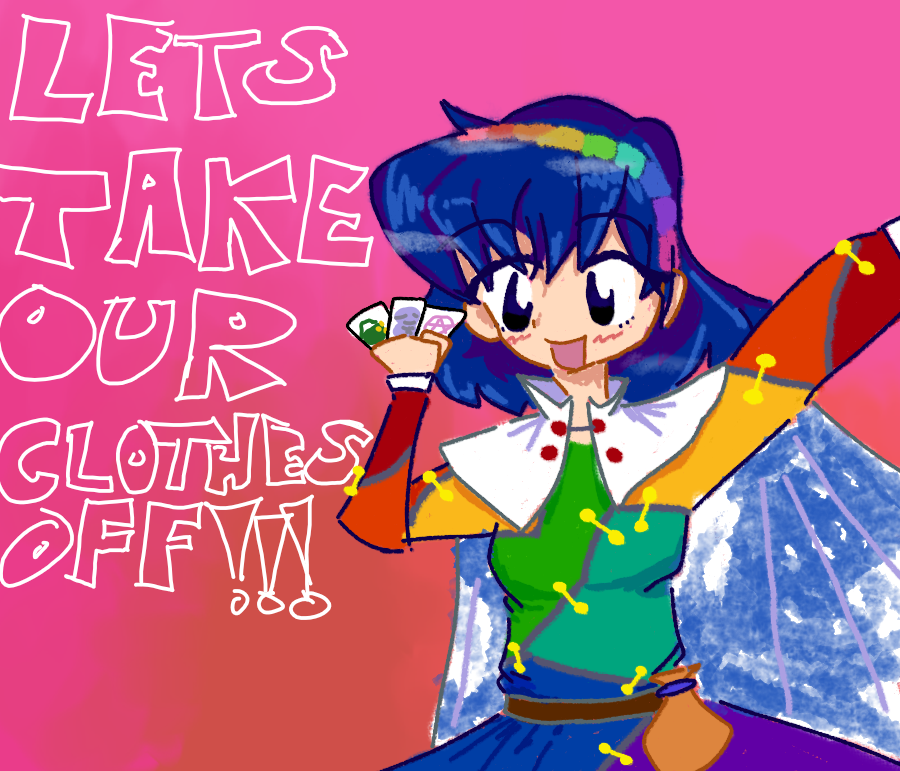 CHIMAATAAAA!!!! why does she want to take her clothes off? idk i was just kinda getting that from the expression and i thought itd be funny